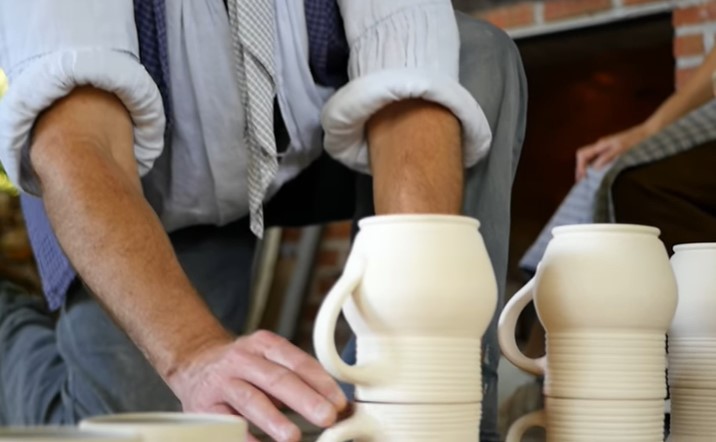 If you are immersed in the pottery world, whether as a potter yourself or a lover of fine things, you would have come across quite a number of designs and finishes. And one thing is for sure, these units bring different things to the table so you might want to get to know more about them. As a result, today we’ll be telling you all about the famous salt-glaze pottery technique.

Creating things with our hands gives us confidence and pride, and a sense of purpose. We all crave something like this, whether we admit it or not. Working with clay is a great hobby, it can help you relieve stress and it is also a great way for you to make use of your time in a more efficient manner while at home.

Whether you are new to pottery and are looking to learn more about it because you’ve become hooked, it is always a good idea to learn as much about your subject as you can. And today we’ll be sharing with you all you need to know about how exactly salt glaze pottery is made and more.

The salt-glazing process originated in Germany as far back as the 15th century which informs why it grew to quickly become a staple mode of pottery finishing in the region.
Salt-glazed pottery is usually characterized by its German origin. It is also known as vapor glazed, due to the sodium vapors from the salt. This effect brings a high-gloss, translucent appeal to the finished work.

That said, not all German-made pottery is salt-glazed. If it is an old or new piece made in the country, though, there is a high chance that it is.

Is salt-glaze still in use?

Salt glazing has been around since the 14th century. And though it’s no longer used as an industrial way of making pottery, it is still popular amongst individual potters. Small craft potteries still produce beautiful salt-glazed pottery.

What is salt glaze in ceramics?

Salt glaze, in ceramics, a glaze having the texture of orange peel, formed on stoneware by throwing common salt into the kiln at the peak temperature. Sodium from the salt combines with silica in the clay to form a glassy coating of sodium silicate.

How does a salt glaze affect pottery?

Salt and soda firings can really affect any underglazes or slips you use on your ware, and the results can be very varied and interesting. Salt glazing also adds a brilliant texture to the ceramics, from the building up of layers to the running of salt vapors.

Can you glaze pottery without a kiln?

Keep in mind that if you don’t have a kiln, you will either have to buy your bisque ware to glaze. Or you will also need to ask the kiln firing service to bisque fire your pottery first. As explained above, and here in this article, most pottery does need to be bisque fired before it’s glazed.

Traditional salt-glazed pottery is usually grey, buff, or brown stoneware. The glaze itself usually has an orange peel texture, which has lots of small craters that look like pinpricks. This mottled texture is caused when the hot molten glaze is unable to become smooth during the firing.

How does the salt-glaze process work?

The salt-glazing process is one of the best, most widely used, and famed adaptations of stoneware production from a few centuries ago. Salt-glazing refers to the heating (to vapor state) of common salt particles during the kiln firing process, causing the salt vapor to bond with the silica (of the clay) and produce a glossy, acid-resistant finish.

The salt is not put into the kiln with the pottery at the initial stages. When the firing process reaches the final, high-temperature region, the salt is introduced to create almost instantaneous vaporization and bonding with the stoneware.

What are the salt glaze main methods?

There are two main methods of adding salt to the firing kiln during the production process:

How to identify salt-glazed pottery?

One of the fastest ways to identify salt-glazed pottery is to look for the origin. If it is German, there is a high chance that the piece was finished using this process.

Numbers and Their Hyphens

Another way to identify German-made pottery, which then translates into salt-glazed items, is by the hyphenated numbers. Whenever you find these numbers, know that you are holding a more modern-day piece of art from the German side. The first number is indicative of the pottery’s shape while the second number refers to the item’s height (in centimeters).

Manufacturers’ marks have appeared on different pieces of pottery over time. Salt-glazed pieces are no stranger to the movement. However, they do not all bear the same kinds of marks.
On some units, the marks indicate the manufacturer’s name and also the glazing process too. On some other picks, things are not as straightforward.
Leading into the 20th century, manufacturers started stamping their salt-glazed potteries with ink marks on the bottom.

Beer steins found a lot of favor with the potters that made salt glazing their bread and butter. The hyphenated numbers usually come stamped/ punched onto the pewter lid of the beer stein. Some of these specific potteries also had special colors added to them with cobalt oxide/ manganese oxide/ iron oxide.

What were the most common colors on the salt-glazed potteries?

What type of salt is used in salt-glazing?

Most often, the salt used when salt glazing pottery is a common salt.
Sometimes potters will experiment with different combinations of material. For example, using a 50/50 mixture of rock salt and sawdust to enhance the orange peel texture. Others will add a percentage of borax frit to the salt to create a smoother finish to the glaze (Hamer and Hamer 2015, p 317).

The salt is usually added to the kiln when it has been made slightly damp. Sometimes dry salt granules can simply fall to the bottom of the kiln without vaporizing.

Types of kilns used for salt-glazing

A wood-fired kiln will normally have a firebox located at the base of the kiln. As the name suggests, the firebox is where the fire burns in the kiln.

The potter begins to heat the kiln by lighting a fire in the firebox. Gradually over time the fire is fed and stoked and gets larger and hotter. As the fire builds up, the heat in the kiln increases. The flames from the fire will enter the kiln from the firebox and be drawn towards the chimney.

For salt glazing, a wood-firing kiln often has a cross-draft design. This means that the firebox is on one side of the kiln. And the chimney is on the other.

Different kinds of gas-fired kilns can be used for salt glazing pottery.

Larger gas kilns tend to be natural gas kilns. These can have various different designs. One such design is the ‘car kiln’. With a car kiln, the base of the kiln is on wheels or casters. To load and unload the kiln, the base is wheeled out of the kiln.

Wood-fired and natural gas kilns are both large and take days to fire and cool down. Propane gas kilns are an alternative way to salt glaze pottery in a relatively short period of time.

TOAUTO Crucible is made from a combination of clay & graphite materials and large capacity that is able to melt 6KG copper, 12KG gold, 7KG silver, and 1.6KG aluminum easily.

113ML graphite mold has nice thermal conductivity, which can greatly shorten the melting time and save energy, and withstand 2000 degrees Celsius. 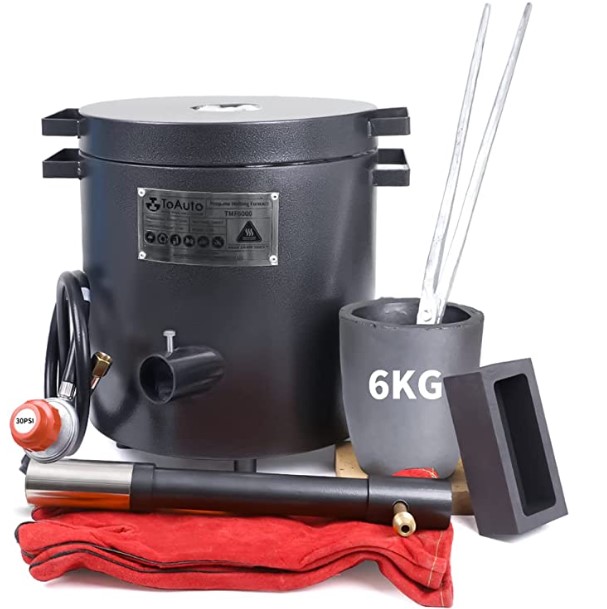 The GONGYI propane melting furnace is suitable for melting precious metals and other types of metals, such as gold, silver, metal, aluminum, copper, brass, zinc, and so on.

How is the salt added to salt-glazing?

Some salt glazing kilns are designed so that the salt is sprinkled through holes in the top of the kiln. However, it’s more common for the salt to be introduced at the side of the kiln.

How much salt is used in salt-glazing?

The process of adding salt to the kiln is called ‘salting’. Traditionally, 3-6 saltings were used when firing.

Part of the reason for multiple saltings was to build up a good layer of glaze on the pots. The more salt vaporizes in the kiln, the thicker the glaze.